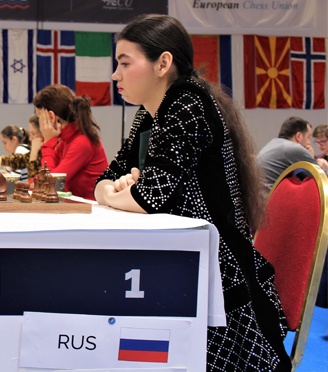 With a Round 8 victory against Ukraine, Russia scored impeccable 16 match points to be ahead of Georgia whose players secured a silver medal. After Kateryna Lagno defeated Osmak Iulia, two draws happened on the board 1 and 3 – between Muzychuk Anna and Goryachkina Aleksandra, and Buksa Nataliya and Shuvalova Polina.

Gaponenko Inna tried to score for Ukraine against Kashlinskaya Alina on the board four, but eventually, Kashlinskaya took another point for Russia and the match ended with a final 3-1 result.

In a direct encounter for medals, Georgia overwhelmed Greece with 3.5-0.5 score and secured second place with 13 match points.

Seven teams are in a tie for third place and enter the final round fighting for bronze: Poland, Azerbaijan, Ukraine, France, Netherlands, Hungary and Greece.

Pairings, results and standings can be found here.

The two leaders of the Open section: Azerbaijan and Ukraine quickly finished the match with all four games ending with threefold repetition. With an overall 2-2 score, both teams kept the lead and entered the last round with good chances for gold.

The team of France defeated Russia with a tight 2.5-1.5 victory to score 12 match points and leap on the top. Lagarde Maxime brought the decisive point for the French team winning against Esipenko Andrey while the first three boards ended in draws.

All four teams: Armenia, France, Azerbaijan and Ukraine enter the last round sharing the lead with 12 match points.

The 9th round will be played tomorrow starting from 15:00 CEST and will decide the Medalists of the event. The top pairings are:
France – Azerbaijan
Ukraine – Armenia
Spain – Netherlands
Georgia – Poland
Russia – England

Pairings, standings and results can be found here.